Among the reasons cited by the FCC in support of its 2017 policy was its conclusion that reclassification of broadband internet access as a lightly regulated information service was “likely to increase ISP investment and output.” USTelecom agreed with that assessment, and the data in the ensuing years has borne out the prediction with significant investment growth in the last two years.

Not surprisingly, the D.C. Circuit took no issue with the FCC’s investment analysis, finding attacks on the FCC’s conclusions regarding the negative impact of utility regulation on broadband investment to be unpersuasive. In fact, the court found “the agency’s position as to the economic benefits of reclassification… is supported by substantial evidence.”

USTelecom has published data showing aggregate annual capital investment by broadband providers from 1996 through 2018. According to this research, industry capital investment grew each year since the last recession, peaking in 2014 at $78 billion. In 2015, when the FCC imposed heavier utility-style Title II regulation on broadband (the classification the 2017 RIF Order reversed), annual industry capex fell by half a billion dollars. Capex fell again in 2016 by $2.7 billion.

Spending declines stopped and capital investment returned to growth in 2017 when the FCC signaled its intention to repeal Title II classification of broadband. Investment grew by $2.1 billion that year and grew again in 2018 by $3.1 billion. USTelecom’s investment research stated, “…the decline in the series in 2015 and 2016, followed by a return to growth in 2017 and 2018 after the FCC had indicated its intention to repeal the Title II classification, suggests that expectations regarding common carrier regulation were likely a factor.” 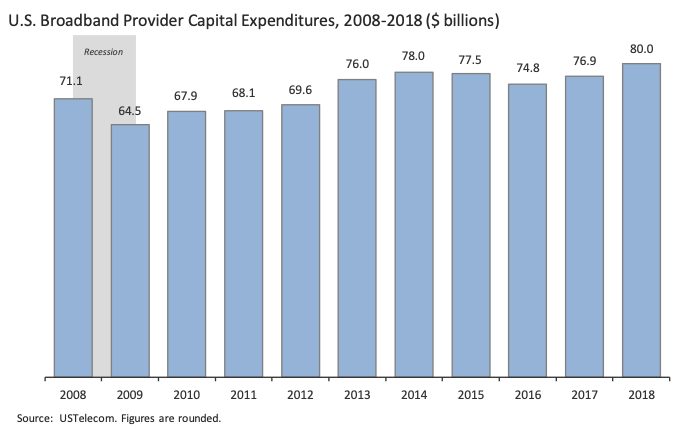 USTelecom has “consistently stated that the relevant question with respect to the impact of Title II on investment is what investment would have been over the long term under different regulatory scenarios, holding other factors [that affect investment] constant.” USTelecom agrees with observers – including the FCC in the 2017 RIF Order – that simple trends in aggregate industry capex are not sufficient to demonstrate the causal impact of common carrier regulatory classification.

In the 2017 RIF Order, the FCC evaluated the evidence on the record and concluded, “No single study is dispositive, but methodologies designed to estimate impacts relative to a counterfactual tend to provide more convincing evidence of causal impacts of Title II classification. Having reviewed the record of these studies, the balance of the evidence indicates that Title II discourages investment by ISPs—a finding consistent with economic theory.”

On appeal in Mozilla v. FCC, parties led by the Internet Association (IA) attacked the FCC’s conclusions regarding investment as arbitrary and capricious. The court disagreed. In the end, the court concluded “the Commission’s recognition that the [2015] Title II Order’s effect on investment was subject to honest dispute, focusing on what is ‘likely’ to happen and [finding] modestly that ‘[t]he balance of the evidence in the record suggests that Title II classification has reduced ISP investment in broadband networks.’”

USTelecom applauds the FCC and the court for a balanced and incisive approach to evaluating the data and analyses before them. In the end, the internet remains an open platform for innovation – and investment by broadband providers is on the rise.

Statement: Joint Lawsuit Against Vermont; Call for National – not State – Framework for an Open Internet