Global mobile internet traffic is expected to grow seven times from 2016 to 2021, and U.S. mobile traffic will grow five times, according to a new mobile traffic forecast released by the Cisco Visual Networking Index (VNI). Mobile traffic growth reflects exciting innovations in areas such as mobile devices, mobile online video, the Internet of Things, and Virtual Reality.  Yet what often gets lost in the excitement over these new innovations is the core role wired networks play in providing the backbone to accommodate surges in mobile traffic, a role that will increase over the next few years.

Nearly all mobile data traffic rides over wired networks, whether via Wi-Fi, which is merely a short-range extension of a wired network, or via the longer-range wired backhaul connections that link cell towers to broader voice and data networks. Wired network providers invest significant amounts of capital to accommodate all types of traffic growth, including continually expanding capacity for mobile network off-load.

Mobile data traffic – traffic that remains on cellular data networks – is growing twice as fast as overall IP traffic, according to the Cisco VNI. Yet, the Cisco VNI data indicate that mobile data represent a very small portion of overall Internet Protocol (IP) traffic. Globally, mobile data represented 9 percent of IP traffic in 2016 and that figure will grow to 20 percent over the next five years by 2021. The figures are even starker in the U.S., where mobile traffic was only 5 percent of total IP traffic in 2016, growing to 9 percent in 2021.

The chart below, based on 2015-2020 data for both fixed and mobile networks, illustrates the critical reliance of all traffic on wired networks. (Cisco has not yet released this data for 2016-2021.)

The chart shows that the vast majority of data traffic traverses wired networks: directly via Wired connections; from offloads onto Fixed / Wi-Fi Networks via Wi-Fi-Only Devices (e.g., from laptops or connected “Internet of Things” devices); or via offloads onto Fixed / Wi-Fi Networks from Mobile Devices (e.g., from smartphones and tablets). The portion of traffic that goes over the cellular mobile network, reflected in dark purple on the top of each bar, is small and growing. But, as discussed above, even that mobile cellular traffic depends on wired backhaul. Moreover, these charts are for global data. The mobile portion is, and will remain, significantly lower in the U.S.

Wired networks play a critical role in making all of these innovations possible. 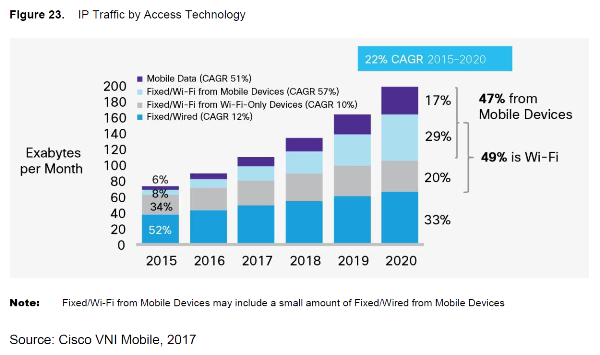