The concept of the ITG started in June of 2015, when USTelecom formed a Robocall Engineering Working Group (WG). USTelecom invited its voice service provider members to participate in this WG with the goal of easing and simplifying the process of tracing the origins of robocalls.

During the course of these WG efforts, the group noted that the sharing of certain network intelligence and traceback information among its participants could and did lead to the successful thwarting and mitigation of unwanted and illegal phone traffic.

In May of 2016, the WG felt it would be beneficial for wide-scale industry participation, and to include service providers from outside of USTelecom’s membership in these robocall mitigation efforts. USTelecom therefore developed a framework for participation and governance and began to invite numerous service providers to participate in traceback efforts. The ITG was officially formed with twenty-one members. 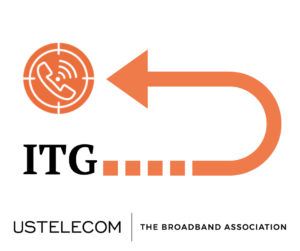 *UPDATE: The ITG now has more than 30 voice service providers as members, a set of policies and procedures, and recognition at both the state and federal level. So far over 100+ companies have participated in tracebacks, conducting 1000+ tracebacks and implicating more than 10 million robocalls—helping bring the bad actors behind illegal robocalls to justice.

Testimony before the U.S. Senate Committee on Commerce, Science, and Transportation