U.S. broadband provider capital investment increased by approximately $3 billion in 2018, continuing the positive momentum shift that began in 2017 when the FCC initially signaled its intention to restore a forward-looking regulatory framework for broadband.  According to a preliminary analysis of 2018 company data, USTelecom estimates that U.S. broadband providers* invested approximately $75 billion in 2018, up from $72 billion the prior year.** These figures confirm that the growth trend identified in USTelecom’s February analysis of the top six broadband providers applies more broadly.*** 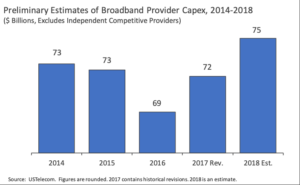 For the last nine years, USTelecom has reported aggregate industry annual capital spending dating back to 1996, after collecting, analyzing, and evaluating all relevant data and ensuring consistent comparisons over time.  As detailed in previous research, by 2016, broadband providers’ annual capital investment had declined by several billion dollars from the recent peak in 2014.  Annual broadband investment rebounded in 2017 and the data now confirms that the upward momentum continued in 2018 – at least for the providers analyzed here, who historically account for nearly 95 percent of aggregate capex.  USTelecom will publish final 2018 numbers once it can account for non-reporting companies.

The decline in capital investment starting in 2015 and the recovery that started in 2017 suggest the likelihood of a negative regulatory impact from the 2015 utility classification of broadband providers and, conversely, a positive impact from a return to a more forward-looking policy environment in 2017. Therefore, these capital investment data warrant further economic analysis.  Of course, many factors affect company investment decisions, such as macroeconomic conditions, technological developments, capital costs, taxes, competitive upgrade cycles, and regulation.  A key question when formulating broadband policy is the long-term impact of differing regulatory regimes on aggregate investment, holding these and any other relevant factors constant.

USTelecom’s top line broadband capex data strongly suggest that the current pro-investment, pro-innovation, and pro-consumer policy environment is working.  Broadband providers are putting an increasing amount of capital to work, upgrading networks, rolling out fiber and 5G wireless, and narrowing the digital divide.  Consumers are enjoying faster broadband as well as new applications and online content.  To maintain this momentum and bring the benefits of our connected future to all Americans, we must maintain a forward-looking policy framework.

*** These new figures differ from the February analysis because they include more providers and include adjustments to the reported data to ensure consistency with the historical series, such as excluding international, satellite, and content capex.

Dispatches from the Summit