Traceback is Key to Winning the Robocall Wars

For too long, determined and criminal robocallers have had more or less free rein to poison our shared communications networks.

Taking advantage of innovation, including the proliferation of internet technologies like Voice over Internet Protocol (VoIP), they have targeted the most vulnerable among us, scheming American consumers out of about $10 billion each year with calls about a fake debt to the Social Security Administration, a supposed opportunity to forgive a loan, bogus tech support, or a claim that your electricity is about to be shut off without an immediate payment.

These calls have damaged the trust in our communications networks. When we don’t pick up the phone there are a real consequences – we may miss a real call from a hospital about an upcoming appointment, a business with a delivery update, and more.

And communications providers have had enough.

Together, we are fighting back, showing the promise that collaboration among all stakeholders – voice service providers, the government, and victims of illegal robocalls, both individuals and companies – can hold.

Since USTelecom | The Broadband Association established the Industry Traceback Group (ITG) in 2015, we’ve played a central and growing role in the battle against illegal robocalls. Relying on examples of illegal robocalls made available by consumers, enterprises, government entities, and providers, ITG “tracebacks” implicate hundreds of millions of calls plaguing telephone customers and our findings have supported numerous federal and state enforcement actions, targeting nearly 50 individuals and entities. 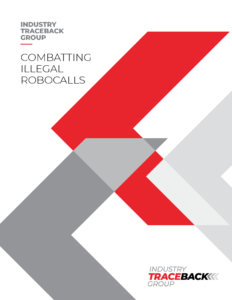 Today we released a new report showing the robocall traceback process and why it has emerged as a tool to stop the scammers and spoofers polluting our networks.

Now in its sixth year – and first full year since being designated by the Federal Communications Commission (FCC) as the official U.S. registered traceback – is entering a new phase in the robocall wars.

In 2020, the ITG received 275% more subpoenas and civil investigative demands from law enforcement partners than in 2019.

And, in late 2020, the FCC adopted a requirement mandating that all voice service providers cooperate with ITG tracebacks.

This is why we trace back these calls. It works.

With the all-hands approach best represented by the ITG – and complemented by aggressive enforcement and industry deployment of caller ID authentication technology and robocall blocking and labeling tools – we are taking back the telephone network from illegal robocallers and the internet-based voice service providers that let these junk calls on our networks in the first place.

This is a fight we are going to win.