Other findings: average seven months to recover and $170,000 cost to resolve a breach

Recommendations for businesses and policymakers to incentivize better cyber defenses

USTelecom’s 2021 Cybersecurity Survey: Critical Infrastructure Small and Medium-Sized Businesses (SMBs) examines the cybersecurity risks, readiness and realities of SMBs that own, operate or support U.S. critical infrastructure, including energy, financial, water and communications networks. The survey found these enterprises are especially vulnerable to cyber breaches that can take longer to detect and recover from, and pose a real and present threat to national security.

Robert Mayer, USTelecom’s Senior Vice President of Cybersecurity & Innovation, said: “Don’t be fooled – these companies may be small or have fewer employees than their counterparts – but they play a big role in operating and safeguarding our country’s critical infrastructure, including energy, financial, water and communications assets. There is nothing small about the importance of bolstering their cybersecurity posture to improve our collective security.”

Among the key findings in the USTelecom survey:

Mayer added: “USTelecom commissioned this survey to help companies and policymakers bolster cybersecurity because a failure at any individual, but interconnected, critical infrastructure company could impact the broader digital ecosystem. SolarWinds and the recent attack at a water plant in Florida demonstrate that companies need to immediately take stock of their cyber defenses – and get ready.”

Charlie Tupitza, Lead Cyber and Data Protection Consultant at America’s SBDC, said: “The information in this survey is vital for all small businesses to understand no matter their size or the markets they serve. It underpins the need to take threats to their critical information seriously. Most small businesses have little if any room to absorb any daily productivity loss pointed out in the survey. The average cost to resolve a cyber breach, especially now, is catastrophic to their sustainability.” 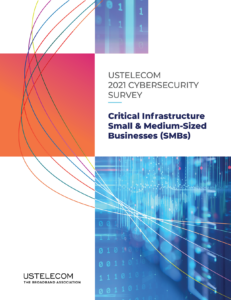 USTelecom is the national trade association representing technology providers, innovators, suppliers, and manufacturers committed to connecting the world through the power of broadband.

This Halloween, Don’t Be Scared by Botnets